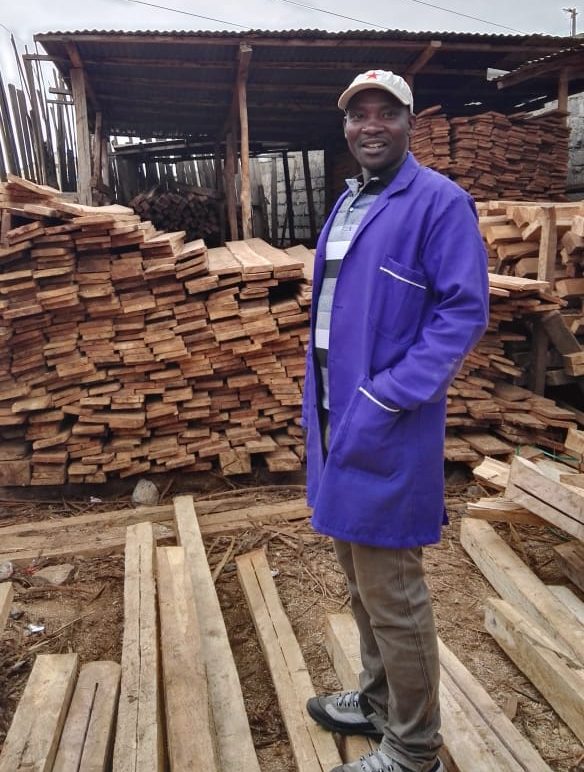 This is John Musembi Shikuku. Shikuku comes from western region in Kenya and transacts business in Ruiru town. He owns a timber yard and a carpentry workshop. He also sells materials used in carpentry. During our field visits we find him in his yard attending his customers. He welcomes us with a jovial smile. In our conversation we learn that he started his business with Kshs. 2000 only and that he could not grow his business faster as he wanted since all his income was hand to mouth.

Thanks to PCEA RUIRU SACCO where he enrolled to be a member in 2011 and has been saving since then. He decided to apply for a loan of Kshs. 300,000 which he used to put up a timber yard. The timber yard is now worth 1.5 million; he confesses and is hoping to grow it to a saw mill in the near future. After his first loan, he has applied for more loans facility which he has bought land in Ruiru and expanded his business. He tells us he now cannot fear borrowing as much as his strength can allow after securing a loan of 1million last few months

He tells us that he has found peace in saving with a Sacco and that he can walk in a secure a loan at an affordable rate. He is also pleased by the products we offers including the supper loan which has clearance period of 48 months. We engage him in some light moments and I gather from him that he enjoys the interest on deposits offered every year especially the last two years where member have received at 10.5%.

He says and I quote “it’s amazing to save money then get it all back in form of a loan. In fact, get more than you saved and then you are awarded at the end of the year. Surely peoples’ poverty is manmade.”