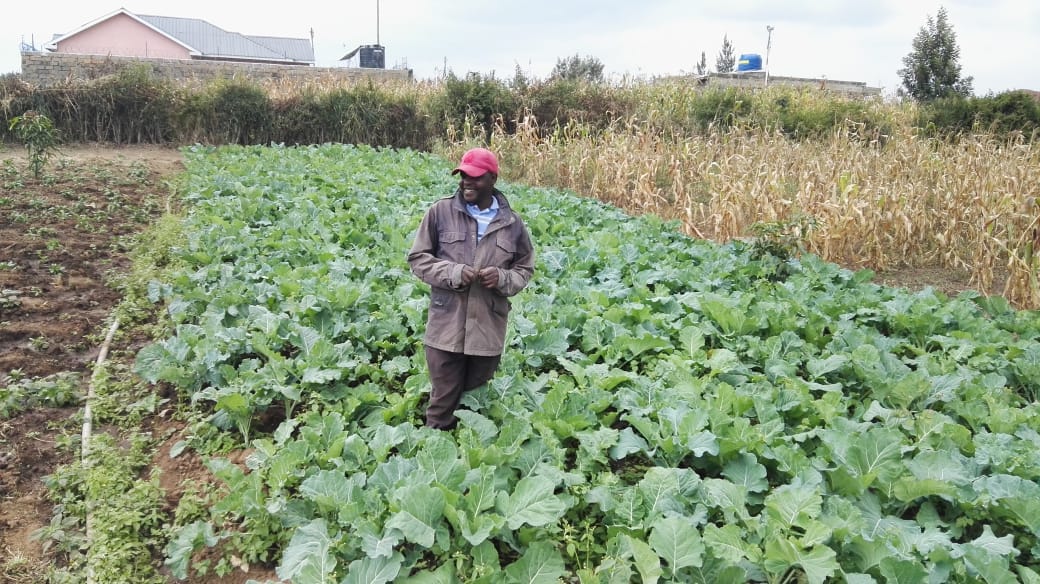 Walking in Mutonya village Ruiru Sub County you will not fail to notice this well cared for horticultural farm. Kales, Spinach and tomatoes call you from afar under the scotching sun of September. You fail to comprehend how the owner is able to make this land look so green even in dry season. The magic man is none other than John Ngaba Ndung’u a member of PCEA RUIRU SACCO.

As you come closer to the field your questions are all answered. A network of pipes running through the entire field is an evidence of a work well done. From a distance you can hear the water pump roaring, drawing water from the nearby river.

At the field we meet John Ngaba himself going round the field inspecting his yield. He enjoys his work. in fact, he says he cannot seek for a white color job. He throws a joke that he earns more than bankers in his field.

When we ask him how he has been able to acquire all this, he answers with finality “SACCO.” John Ngaba has been making small savings which enabled him to acquire a loan of Kshs. 30,000 which he used to lease land he is farming. Later he has applied for more loans facilities and continued to mechanize his farm. When he started, he did not have a water pump but now all the water system has been dealt with.

John joined PCEA RUIRU SACCO from another Sacco where he claims he was dissatisfied by their services. He has since built a working relationship with PCEA RUIRU SACCO and is able to secure loans to grow his agribusiness. His vision is to save enough to grantee him a loan that will enable him to buy land of his own so that he can do perennial crops such as fruits farming.

Joining PCEA RUIRU SACCO, for him was a blessing.